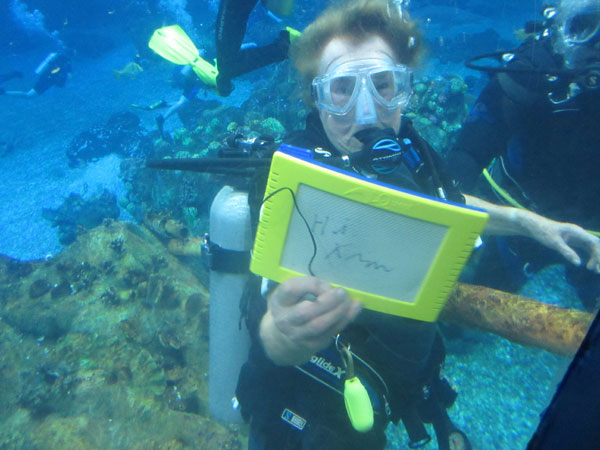 Jeannie Loughry might just be the oldest female scuba diver IN THE WORLD!

Jean completed her 627th dive at Epcot last year on May 19th, 2015. Although we are still researching who actually holds the World Record, Dive Quest presented her with a certificate, T-shirt, stamped her log book and gave her a DVD of the dive (everyone else had to buy it for $35.00). She had a fabulous time. And She got to surprise her Sister! After the dive they went to Naples and surprised her sister Nellie on her 90th birthday.

Thanks to all who sent her cards, she was thrilled !!

This is what we do know:

Jean has applied to the Guinness Book of World Records and we are awaiting confirmation to see if she made the record!

You can read more in an article posted by Trib Total Media: http://triblive.com/news/westmoreland/8891622-74/loughry-dive-scub