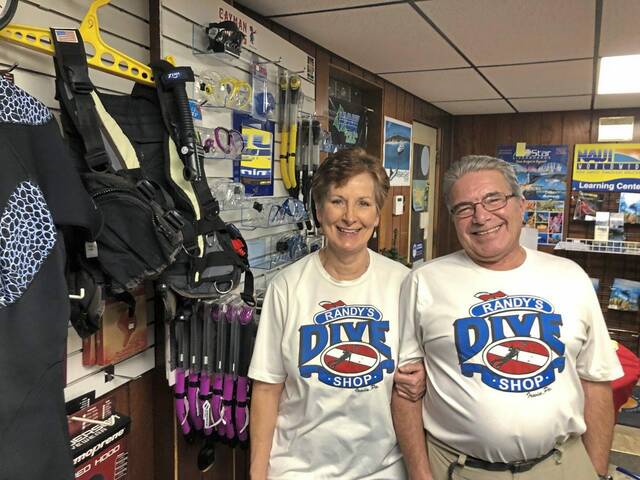 In January of 2022 Aaron and Chaia Schilke purchased Randy’s Dive Shop from Barb and Van Van McGhee admits always being captivated as a boy by the underwater adventures of fictitious ex-U.S. Navy frogman Mike Nelson in “Sea Hunt,” a television drama series from 1958-61 starring Lloyd Bridges.

“I thought it was just fascinating,” he said.

For 40 years, McGhee, 70, and his wife, Barb, 63, of Manor, have pursued that enjoyment of underwater adventure while still rooted in Western Pennsylvania — as owners of Randy’s Dive Shop, a Westmoreland County-based scuba diving shop they have operated most of the time out of their home.

The McGhees, who are retiring Jan. 1, sold the unique business they bought in 1982 to Chaia and Aaron Schilke of North Huntingdon.

“It’s hard to believe that 40 years have gone by,” Barb McGhee said.

Van McGhee also found it hard to believe, but heartening, that some customers come in and register their teenagers for diving classes and “the parents were certified and outfitted at Randy’s, too.”

“It’s a huge compliment that they’re returning with their child and really cool that their child is learning to dive with Randy’s,” Barb added.

Van McGhee said he rarely missed a Sea Hunt episode. So when his younger brother, Bob, suggested they take scuba diving classes at the Seton Hill University pool in the 1970s, he jumped at the chance. They were both certified in 1975. Bob, who died in 2008, eventually became a commercial diver in New York City.

The previous owner of Randy’s, Van McGhee said, was the late Dan Woodward, who ran the shop out of the basement of his home along Route 136 selling equipment and assisting instructors training divers.

He ran the shop for more than 20 years. Woodward named the shop Randy’s after his oldest child, and Van kept the name because of its familiarity with local divers.

Barb has been diving for 38 years. She holds a NAUI Master Diver Certification with at least 1,200 dives.

In addition to the store and basement classroom, the couple in 1990 built a 10-foot-deep in-ground pool in their backyard for diving classes.

The McGhees’ three children — Kelley Keiser, David McGhee and Leigh Silverio — are certified, with David also being a NAUI instructor.

The McGhees have escorted local divers on trips around the world.

In 1985, they ran their first Caribbean dive trip with a group of 10 people, Barb said. The trips burgeoned over the decades with diving destinations including Belize in Central America, Fiji, Tahiti and Hawaii to name a few .

“Our customers here are not like a normal business-client relationship through our joint experiences and training together … they’re like family,” Barb McGhee said.

“The water is crystal clear, alluring and extremely cold, preserving spectacular wreck dives,” she said. “I remember the trip well because it snowed in mid-September.”

“The town is so small that marriage and reception announcements were stapled to the telephone poles,” she said.

Chaia Schilke said she and her husband were looking for a unique business, so when Aaron came home last May from a diving certification class and mentioned that the McGhees were planning to sell the business “it was the perfect opportunity.”

The Schilkes, who have two young sons, Asher, 12, and Caleb, 8, still had some reservations, but Chaia laughed at how Barb McGhee relieved her fears.

“I wasn’t even certified until June, and I told her in late May that I wasn’t sure I was prepared to take over a diving business … it’s just such a unique business. Barb laughed and told me not to worry,” Schilke said.

“I told her I was just 23 years old, nine months pregnant and knew absolutely nothing about diving. When people came in and asked for something, I had to call Van up who was working with his father and ask him what the piece or device was,” she said.

“We had no business plan. And 16 months later, we had our second child,” she laughed.

Many area divers such as 84-year-old Kingsley Graham of Murrysville, who dives locally and at a vacation cabin in northern Michigan, said the McGhees were “great to deal with.”

He said the couple will be missed for their diving expertise and camaraderie.

Recently, Graham was dropping off some air tanks to be refilled at Randy’s and joining more than a dozen other dive shop clients and area instructors to welcome the Schilkes.

The Schilkes will use the current location at 529 Sandy Hill Road to operate the shop.

As for Van McGhee, despite retirement he still intends to pursue diving adventures.

“I’ll stay active diving. But it will be in warm water locations … I’ve become spoiled over the years,” he said.